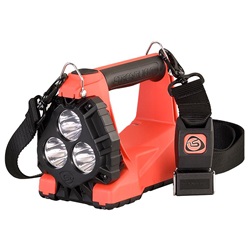 Lightweight and portable, the Vulcan 180 is designed to burn brighter and run longer making it an essential firefighting and utility tool. This rechargeable, waterproof lantern has a 180 degree tilting head which allows you to direct the light where you need it. Three LEDs bring you extreme brightness along with two blue taillight LEDs for visibility in thick smoke.