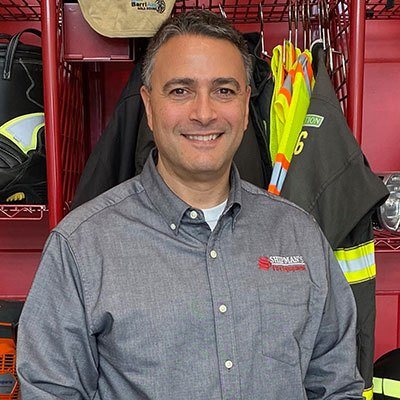 Vince joined Shipman’s in 2015, charged with handling Marketing and New Business Development. In 2017 Vince was assigned to the position of Director of Sales to oversee all aspects of Sales and Marketing for the Company. Vince came to Shipman’s after over 18 years with AT&T in Sales and Marketing of Custom Voice, Data and IP Services to Municipal Markets Nationwide.

Vince is currently an active Volunteer Firefighter with the North Haven Fire Department, serving as a Lieutenant at West Ridge Co. 3. He is certified as Firefighter II, Pump Operator and Fire Instructor I. He is also a part time instructor for Gateway Community College Fire I & Fire II programs. He holds certificates from the Connecticut Fire Academy and has twice received the President’s Volunteer Service Award for his time serving his Department over the years.

Vince lives in North Haven with his wife Kim and their three children. When not at the kid’s sporting events or at the firehouse, Vince enjoys hiking with the family’s yellow lab Aubrey. He is also active in annual charity work with Yale New Haven Hospital’s Toy Closet Program and Food Drives for the North Haven Food Bank. 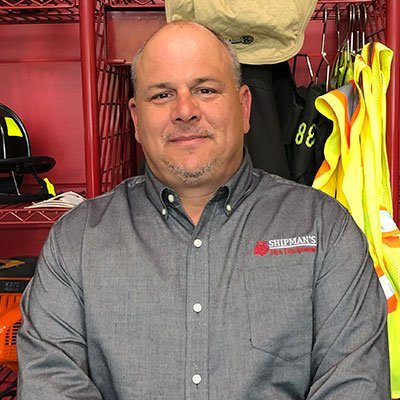 Corey grew up in West Warwick, RI where his father was a Firefighter and eventually went on to Chief of the Department. After attending CCRI and URI for college, Corey was appointed to the West Warwick Fire Department in January of 1990. He served on Rescue 1 for 9 years, Engine 2 for 3 years and the rest of his career on the Tower Ladder.

Corey joined Shipman's in 2010 and is currently serving as the Sales Representative for the Rhode Island territory.

He still lives in West Warwick with his wife and 2 children. When he's not working he enjoys trying to play golf and is becoming involved in youth sports with his children. 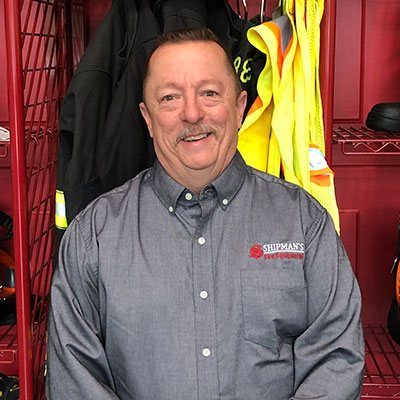 Brian recently retired as Fire Chief of the South Kensington Fire Department after 21 years of dedicated service to the Town of Berlin. He is certified as Firefighter I, Firefighter II, Instructor I, and holds certificates from the Connecticut State Fire Academy, and the National Fire Academy. Brian is a member of the Hartford County and Connecticut State Fire Chiefs Association.

Brian joined the Shipman's team in July of 2009 and brings 10 + years of experience in Fire Equipment Sales to Shipman's. With this comes firsthand knowledge on the Globe Family of Brands including Globe Firesuits, Cairns Protective Clothing, Globe Footgear, Fire Dex EMS & Rescue Gear. He also specializes in Cairns/MSA Helmets, Shelby Gloves, and many other personal protective items. He has been involved with the fire service for over 21 years.

Brian has been married for 34 years to the love of his life, Marianne, they have 3 children – Ron, Sarah, and Rachel. Brian is also a grandfather of 3 – Jack Daniel, James Michael, & Maxwell Brian

When not meeting with customers you can find Brian at home spending time with his family, at the firehouse, or enjoying a good cigar. 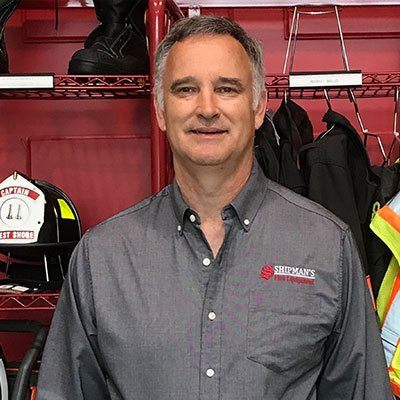 Tom has sold fire equipment for the past eight years throughout Connecticut and Western Massachusetts. He also has experience selling fire apparatus and ambulances. He is bringing a great deal of industry knowledge and experience to our sales team. Tom is an active member of the Windsor Volunteer Fire Department, where he has served for over forty years. He is also a member of the Salem Fire Department and is a State Certified Fire Officer, Fire Instructor and EMT.

Tom will be selling apparatus service, repairs, and maintenance as well as fire equipment in Connecticut, Rhode Island and Massachusetts. 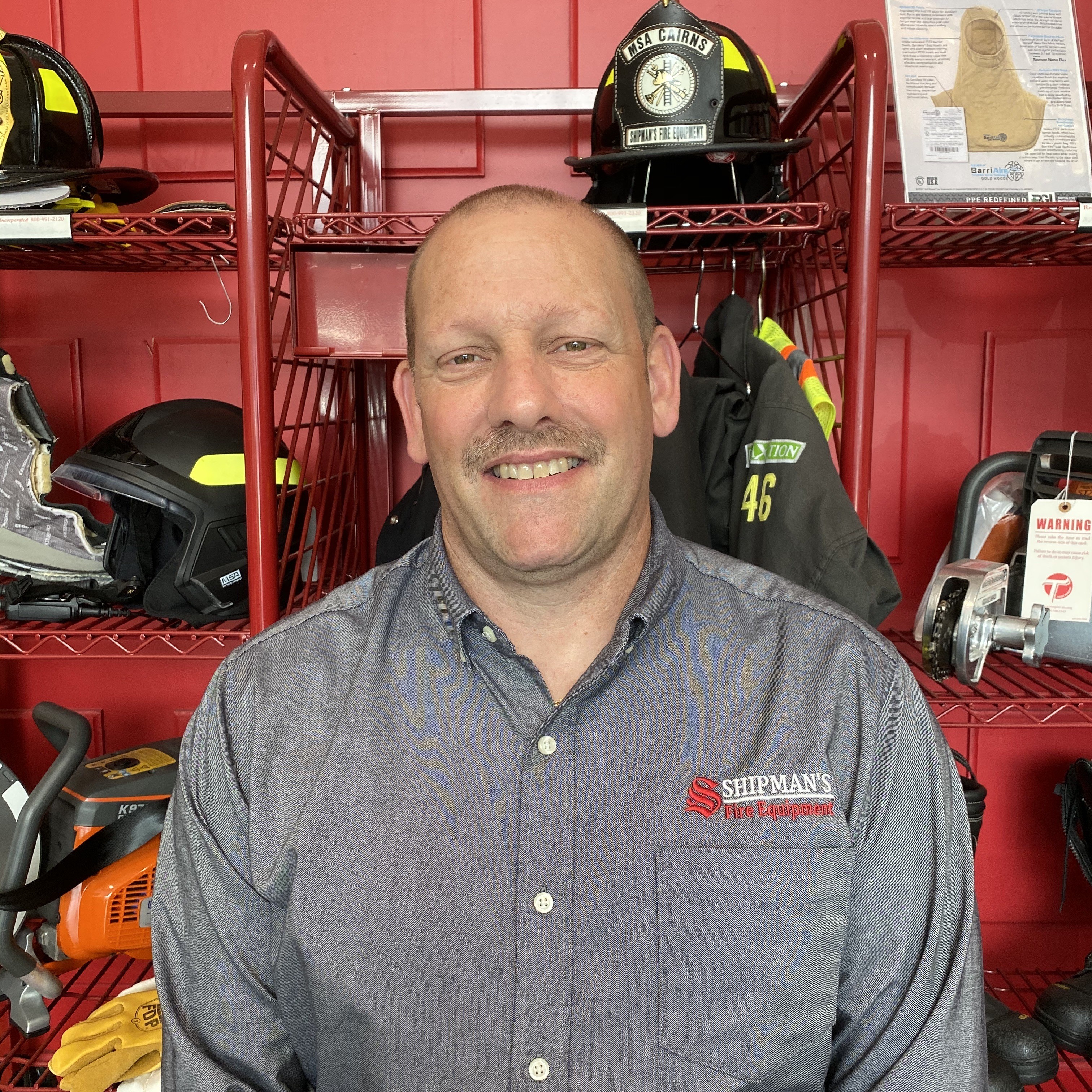 John began working at Shipman’s in 1986, directly out of high school. He was born and raised in Waterford where his family has a deep history in the Fire/EMS service. John began as an “on the road” Fire Extinguisher Technician in the Norwich area. He held this position for fifteen years. He was promoted to Asst. Service Manager and eventually Service Manager, where he ran the day-to-day operations of the Fire Extinguisher Sales & Service Department.

John has enjoyed overseeing the employees and over 2,000 fire extinguisher accounts that he has personally gotten to know creating a lasting bond with a majority of his customers.

With the retirement of Brian Baker, John’s has now become the Sales Representative for Southeastern Connecticut. He is excited to take on this new endeavor and expand his knowledge of the vast amount of fire equipment Shipman’s offers.

John and his wife Debbie recently moved to Ledyard, where they live in close proximity to their four sons and six grandchildren. 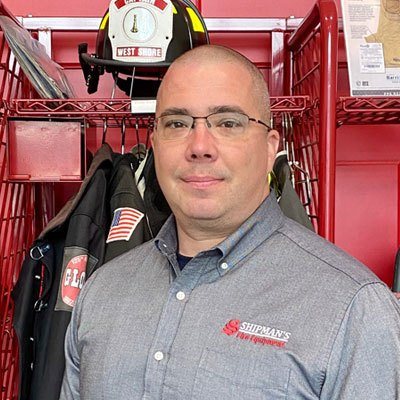 Eric joined the fire service in 1994 starting out as a volunteer firefighter and EMT for the Enfield Fire Department. He was hired by the Southington Fire Department in 1999, where he has risen through the ranks, currently serving as a Battalion Chief/Shift Commander.

Eric holds a Bachelor’s Degree from the University of New Haven in Fire Administration and a Master’s from Columbia Southern in Emergency Services Management. Additionally, he holds various state and national level certifications, is a certified fire marshal, and a graduate of the National Fire Academy’s Executive Fire Officer Program.

Eric also served as the Sales Manager for The Scott’s Company in Ohio, where he supervised, managed, and developed a workforce for a large sales territory.

He lives in Southington with his two daughters. 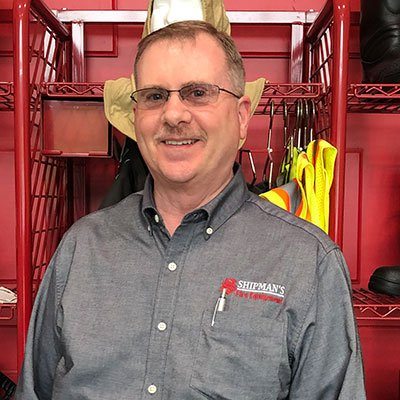 Frank Johns started with Shipman’s Fire Equipment Company in 2005. He has over thirty years of experience in both the fire service and fire equipment industries, specializing in fire equipment and fire apparatus sales.

Frank is a former member, and officer of the Watertown Fire Department, and is a member of the Litchfield County Fire Chiefs’ and the Connecticut Fire Chiefs’ Associations.

Frank has an A.S. degree in marketing, and studied at the University of Connecticut. He is certified as Firefighter I and holds certificates from the Connecticut State Fire Academy, and the National Fire Academy. 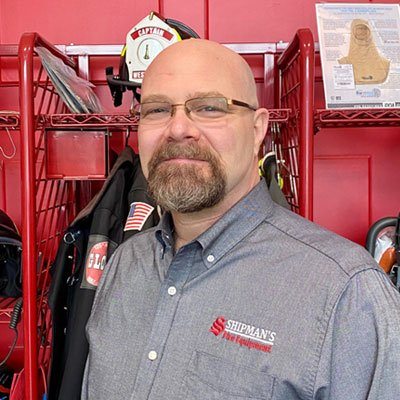 Jim Lyons has been involved in the fire industry for more than 30 years. The majority of that time has been dedicated to fire apparatus design, sales and service however, he is equally knowledgeable in water flow, fire ground hydraulics and equipment.

Jim is a certified sales professional for fire apparatus holding EVT F-2 national certification as well as Fire Instructor-I certification. He is a recognized expert in fire apparatus design and is often interviewed / quoted in many leading trade publications and websites. He has presented programs on fire apparatus specification processes at major industry trade shows.

Jim has worked with Sutphen Fire Apparatus in the past. Many of the existing Sutphen customers in New England were first introduced to Sutphen by Jim over the 10 years he represented the product line.

Jim, a third generation firefighter, became active with the Brookhaven Volunteer Fire Department on eastern Long Island at the age of 17. He held the rank of company Lieutenant and Training Officer. 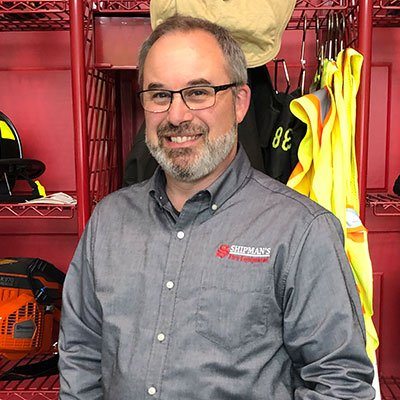 Todd is the son of Shipman’s former CEO and sales manager, David Paige. Todd began working for Shipman’s at our 122 Cross Rd. location in 1984. His first position was that of an in-house extinguisher technician and soon after, his duties were expanded to servicing the Norwich area.

In 1986, Todd was offered a position as a full-time Firefighter with Poquonnock Bridge Fire Department in Groton. In his early years at PBFD, Todd continued to work part time at the company as a Scott technician. Although he was fairly young, Todd rose through the ranks of the PBFD rather quickly becoming Chief of the Department in 2001. Todd served as the Chief for over 13 years before retiring in 2014.

Todd is married to Kelly and together they have raised 4 children. Todd is an avid fly fisherman, bird hunter and enjoys his free time training his Labrador Retriever.

Prior to joining the Shipman’s family in 2017, Phil worked inside sales for a specialty lumber business in Rhode Island.  He attended the University of New Haven for Fire Science with a concentration in Fire Administration.

Phil has been a member of the Hope Valley Fire Department since 2010, and is currently serving as a Lieutenant. He is Pro Board Certified in Firefighter 1&2 and Hazardous Materials Operations, and holds several other certifications from the Rhode Island Fire Academy. Phil has received several special service awards, as well as a dedicated service award from the Hope Valley Fire Department. 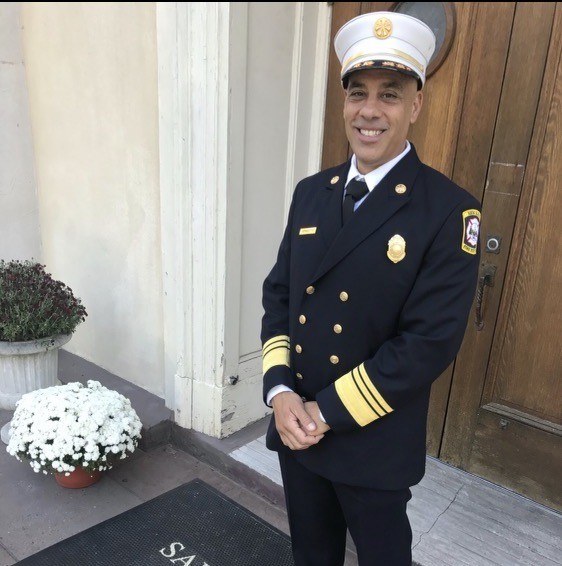 Mark recently retired his position as Assistant Chief of Operations at NHFD after 24 years of service with the department.

AC Vendetto’s dedication to the fire service has been demonstrated throughout his many accomplished years as a member of NHFD. His knowledge of equipment is extensive due to being a long-time user of the premier brands we carry. And his operational experience gives him an in-depth understanding of what one truly needs on the fireground.